The BR Series BC Coilover is the perfect solution for the IS300 owner whether you daily drive their vehicle or like the occasional track duty. The adjustment knobs are easily accessible for fine tuning your compression/rebound. This adjustment has a wide range with 30 different levels of adjustment from full stiff to full soft. Your rebound/compression is put into one adjustment knob to easily tune each damper. This makes it easy to adjust on the fly to compensate for different conditions.
The height on the strut is separately adjustable making it easy to customize ride height to your own liking. This means no preset ride height and you get to choose how high or low you want your IS300. Choose to adjust your height to near stock, or drop it down to the ground. The patented concave lower locking collars help keep your ride height adjustments locked in and prevents any unwanted adjustment changes. Due to the separate adjustment for height, your strut travel will remain the same no matter your ride height which allows full performance and shock travel regardless of your preference of height.

All extreme low kits, swift springs, and custom rates are considered custom builds and will have a lead time of 2-3 weeks before shipping.

Came in great and worked how they are supposed to

Great site to buy parts I order the bc coilovers and I get my order in less the 24 hours which surprised me. I will be shopping for more parts for sure

I really enjoy the coilovers thanks.
It make my car ride smooth and make good sharp turns 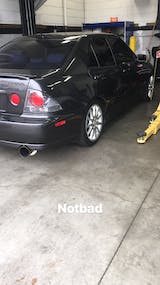 I ordered my coils with custom spring rates, so I expected they would take around a month to be made and shipped. However, is took almost two months from the time my coils were ordered until the ship date. When I contacted bc North America after one month, I was told that my order was delayed due to "black friday sales". I ordered my coils over a week before black Friday. I don't think it's fair that I had to wait the same amount of time, if not longer than the customers who purchased coils on black Friday, especially since I recieved none of the black Friday discounts. People in my area have ordered the same coilovers with the same custom spring setup and have received theirs in less than three weeks. Never ordering coils during November/December months again.

We checked on your order. Ordered Nov 18th. Shipped out on Dec 21st. That is just at the 4 week mark. Custom builds all take 3-4 weeks. November and December builds do sometimes get delayed a bit due to the massive volume of holiday orders. The time from order going out to delivery was a bit longer than normal, but that is completely on UPS due to the holidays
D
D.G.
They are greatt