Our BR model is perfect for street driving and occasional road course duty. With easily accessible adjustment knobs for fine tuning your compression/rebound and separately adjustable ride height, having a performance coilover system couldn’t be any easier. You choose how low or high you want your vehicle, no preset ride height here, and our patented concave lower locking ring keeps it locked in. All of our systems come with pillowball mounts to provide the most feedback possible from your suspension and to sharpen your steering response. BC’s available front and rear camber plates also allow you to get the perfect alignment setup without compromise. All this while providing a strong, attractive looking coilover system.

All extreme low kits, swift springs, and custom rates are considered custom builds and will have a lead time of 2-3 weeks before shipping.

Awesome service, fast shipping, and amazing quality... What more can you ask for? The coilovers look and feel great, I just don’t know why I didn’t get them sooner. I would definitely recommend to everyone who loves to drive. Which I hope is everyone on here 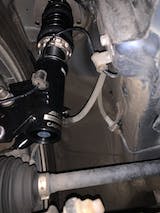 J
J.H.
Great coils but not so great service

Ordered custom rate of 8K with swift springs and understood that the wait time was going to be long. After about 4 weeks or so I received the coils and had noticed they gave me 6K springs instead. With the signed custom built card and everything saying the springs are 6K, including the 060 on the springs themselves. I had already set up my appointment to have them installed but decided I would let coilovers depot know about it, with some pictures of the springs and a quick concerned email. Apparently the pictures I had sent weren’t good enough which I understand because I only took pictures of 1 front and 1 rear coil, however they didn’t reach back to me until the next day when the coils were being put on my car. Now I can’t send any pictures because the coils aren’t entirely visible on my car.. Like I said, great coils and I love how it looks and feels, but it’s really irritating thinking that they maybe tried to save some money by just sending me the stock 6K rate so they didn’t have to waste any resources on building/ordering 8K for me. Whatever though, like I said, great coils, but be careful when asking for a custom rate, as they might not follow through with your request fully.

Had some questions about an order before I placed and contacted them and they were so helpful! Ended up placing my order and there were no hiccups! Great stuff! They've held up great so far and they look awesome!